What the Heck Else is in CBD Oil and Why Does Quality Vary So Much? Ever wonder what’s exactly in your CBD oil besides CBD? Or why the quality of CBD oils varies so much? This blog will go into some of the other “stuff” found in CBD oil and discuss some issues with quality. If you’re at all a little curious about what you may be consuming or putting on your body, this blog is a must read! Before we talk about what exactly CBD oil consists of, first we will talk a little bit about how the hemp plant is grown and then how it is extracted into what is known as “CBD oil” or “hemp extract.” Knowing the specific processes behind hemp cultivation and CBD oil production will guide us on our journey. Finally, we’ll delve into many of the other ingredients commonly (or not so commonly) found in CBD oils. One major thing to remember through all of this: not all CBD is created the same! Quality varies widely! So here we go.

Hemp, or Cannabis sativa, is a flowering annual usually grown outdoors from the months of June through October (in the Northern Hemisphere, that is). CBD specific or CBD dominant varieties of cannabis are considered “hemp” varieties because they meet the Federal government’s legal definition of industrial hemp. As long as the plant has less than 0.3% THC upon harvest (which requires pre-harvest lab testing), it is legally considered “hemp.” High CBD flowering hemp is distinct from true industrial fiber hemp, the latter of which is cultivated for true industrial purposes, such as for the production of textiles (fiber) and foods such as hemp seed and hemp seed oil. Buyer beware! Hemp seed oil and CBD oil are two entirely different oils. CBD oil is not a seed oil, meaning it is not extracted from the hemp seed. True CBD oil is extracted from the flowering tops and/or the stalks of high CBD hemp. Hemp seed oil contains extremely trace amounts or no cannabinoids at all, such as CBD. Many unethical companies out there are selling snake oil marketed as CBD to uneducated consumers. Some companies even tell people their product is the purest out there because it contains no carrier oil, yet the first ingredient on the list is hemp seed oil!

As for the actual quality of hemp being grown in the U.S., quality varies widely from farm to farm. Genetics play a major factor in the end quality of the CBD rich hemp. For example, if the farm cultivates from low quality seed or non-feminized seed-stock, there can be many issues with end quality of the CBD flower, requiring extra steps during the extraction process to correct the issue(s). CBD genetics also vary widely, and each variety has its own unique cannabinoid and terpene profile. Some CBD varieties are popular because they’re easy to grow, they produce more, or they finish earlier, but these factors do not mean the plant produces the highest quality or highest quantity of CBD oil. Alternatively, rainy weather near harvest time can cause issues with mildew and botritis (budrot), potentially contaminating the CBD extract with harmful spores and mycotoxins that are dangerous to inhale or consume. Many small scale farmers have an advantage since they are able to focus more on quality rather than quantity, and they can produce higher quality hemp flowers. Larger scale farms tend to produce more biomass, but the quality can suffer due to the massive scale of their farming operations. It’s virtually impossible to inspect every plant for issues on larger farms.

So once the high CBD-rich hemp is harvested and dried, it is usually in the form of biomass. This means that the flowering tops, the leaves, and the stalks from the dried plants are all combined together and mechanically processed and baled. Some farmers prefer keeping their CBD flowers and their biomass separate, which ultimately increases the end quality of the CBD oil. 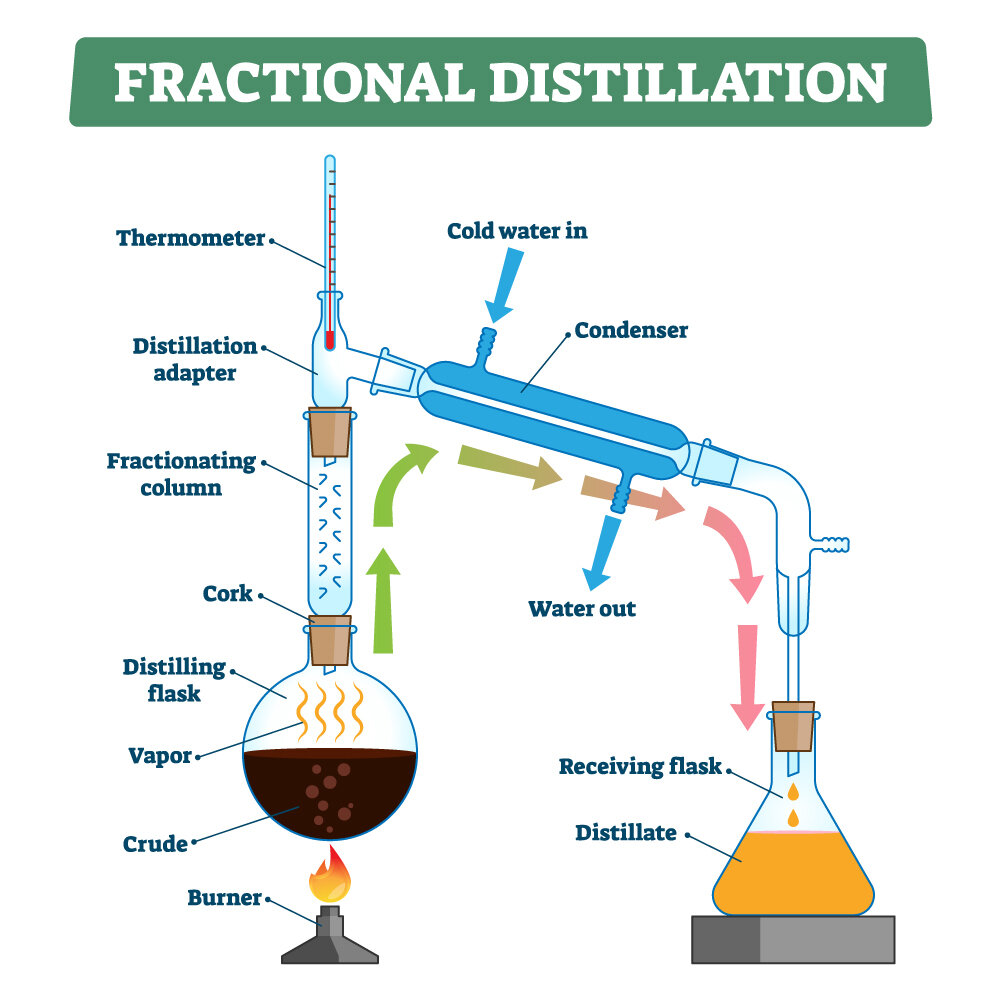 There are currently many forms of CBD extraction on the market, the majority of which require some solvent (extraction agent) to separate the CBD oil from the plant material. Some extractors are using liquid CO2 (Carbon Dioxide), but the majority of extractors are using hydrocarbon solvents or ethanol (alcohol). Each different method yields more or less a similar type of extract called “crude.” Crude is usually a very dark, viscous extract that looks a lot like molasses. We prefer to call crude “whole plant extract.” This crude extract contains all of the plant compounds, including cannabinoids like CBD, pigments and flavonoids, plant cuticle waxes and other phytonutrients. But crude can also contain harmful residual solvents and undesirables like heavy metals or pesticides that need to be removed through further processing. So many extractors will put their crude extract

through other scientific equipment to separate out the different compounds found in the crude extract, separating them into different fractions, ultimately removing them. This secondary process is called “distillation,” which yields a CBD extract called “distillate.,” which then can be further converted into CBD isolate via a chemical crystallization process. Also, since many crude CBD oils contain elevated levels of THC, the THC must be reduced below 0.3% to comply with Federal regulations. Although the dried plant material may have contained 0.3% THC or less prior to extraction, the compound is concentrated to higher levels during the extraction process. Many extractors prefer to remove the THC entirely from the CBD oil. This is accomplished by various means, one of which is called Chromatography, in which various constituents of a mixture travel at different speeds, causing them to separate. Think centrifugal force! Now that we’ve talked about extraction and processing, the main issue with converting crude CBD oil into distillate or isolate forms is that you are also removing many of the beneficial plant molecules like the terpenes (scent molecules), bioflavonoids (pigments), and other phytonutrients, all of which have shown to possess tons of therapeutic properties! At Sow Eden, we prefer a whole plant crude-type extract over distillate or isolate. Why? Because science says whole plant CBD oil is more therapeutically active. We always make sure the whole plant oil we source is free from heavy metals, pesticides, and other harmful contaminants. 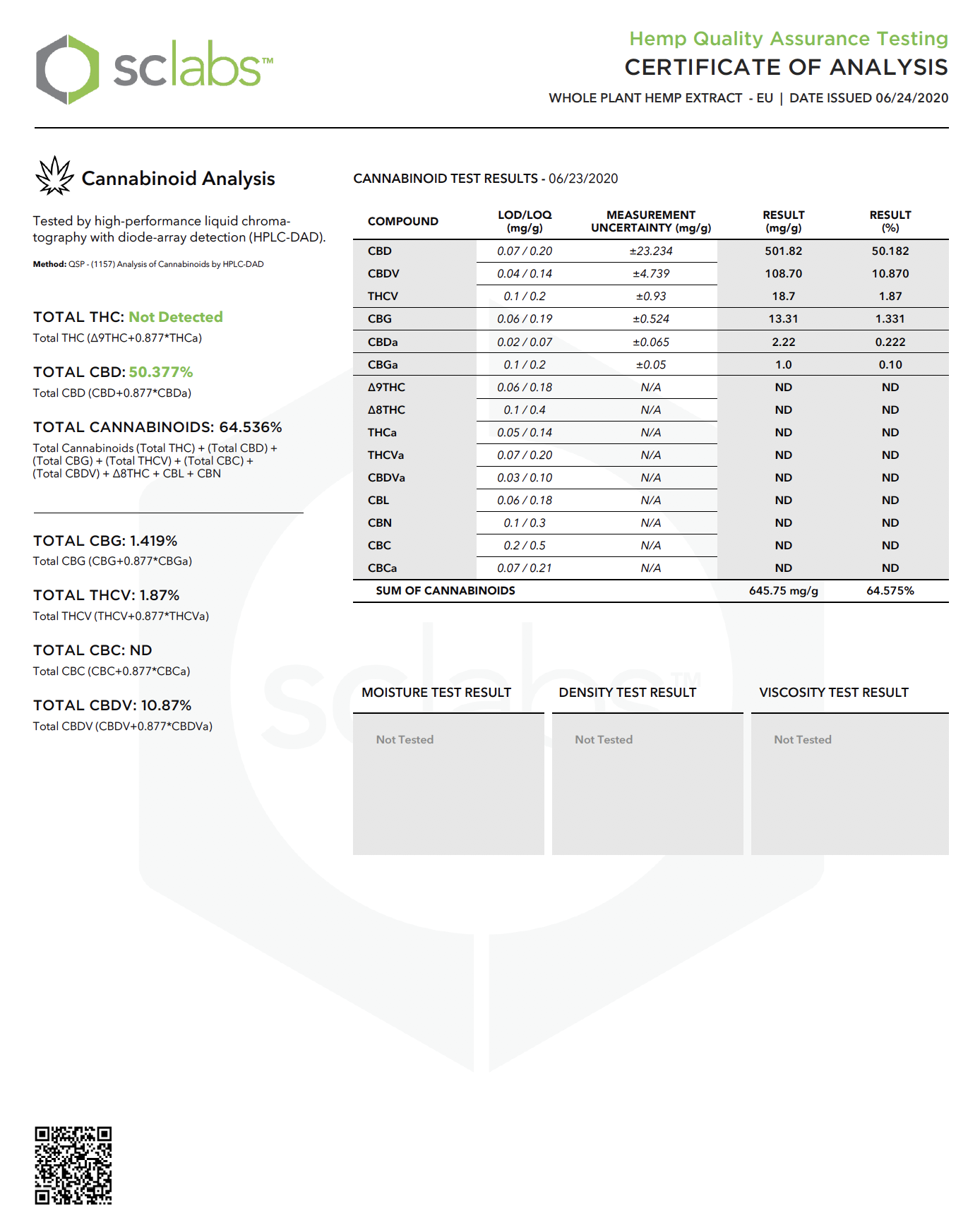 SO WHAT ELSE IS IN CBD OIL, BESIDES CBD?

The simple answer: it’s hard to know unless you actually look at a Certificate of Analysis, or “COA” for short. A COA should tell you the active cannabinoid content of a CBD oil. Since quality and extract type vary greatly, the constituents of CBD oil also vary widely. As a general rule of thumb, CBD oils fall into three basic categories: full spectrum, broad spectrum, and isolate, but no governing agency regulates this terminology. Full spectrum CBD oils usually contain trace amounts of THC, broad spectrum CBD oils contain undetectable amounts of THC, and CBD isolates are strictly CBD and nothing else. A full or broad spectrum oil will contain some levels of minor cannabinoids, but once again it’s hard to know unless you look at a COA. Since many of the CBD oils on the market are made with CBD distillates, they actually contain relatively low levels of other plant compounds since it’s all been removed from the original extract –– the crude extract.

If the CBD product you’re buying is a tincture (sublingual drops), the CBD oil or hemp extract itself will always be diluted in some type of carrier oil. At Sow Eden we use an organic food-grade coconut-derived MCT oil as our carrier, unless you’re buying COMFORT, which contains Evening Primrose oil as the carrier. If the CBD oil isn’t cut with anything, it’s very hard to dose precisely and it makes a mess. Some companies sell CBD oil in a syringe or jar, but tinctures are really the best way to dose for the average person.

CBN - Cannabinol (from the degradation of THC)

Terpenes are a class of organic scent molecules that give plants, in part, their distinct aroma profile. Terpenes are extremely delicate and volatile compounds that are easily destroyed during the extraction process. Terpenes play an important role in the therapeutic action of cannabis, so their presence is important. Many of the more commercialized CBD extracts contain very little to no terpene content, mainly due to the destructive nature of the extraction process. High pressure and high temperatures are not friendly forces to the delicate nature of terpenes.

Bioflavonoids are the pigment molecules that contribute to the coloration and aroma of plants. Beta-carotene is a well-known flavonoid; it’s what makes carrots orange! Bioflavonoids have shown to be highly pharmacologically active, meaning they possess health boosting properties. Unfortunately, many of these bioflavonoids are not captured during the initial extraction process due to the type of solvent used. When they are filtered out and removed during the CBD extraction process, it is for the reason of improving the final color and palatability (taste) of the extract. Crude type CBD extracts are typically the richest in bioflavonoids. These oils usually have a much more pronounced bitter and spicy taste, and they will be very dark in color from the extracted pigments. Ethanol is the best solvent for capturing these delicate bioflavonoids, so that’s why we prefer an ethanol extracted CBD oil at Sow Eden.

Cuticular wax is largely composed of compounds which derive from very-long-chain fatty acids (VLCFAs), such as aldehydes, alcohols, alkanes, ketones, and esters. In short, these waxes create a type of moisture barrier in living plant tissues. During CBD extraction, many of these plant waxes are captured, but many more purified “winterized” oils contain little to no waxes. Winterization is a refinement technique commonly used in biotechnology. The process involves dissolving the plant extract in ethanol, then placing the mixture in a freezer to chill. The sub-zero temperature allows for the separation of compounds by differences in their melting and precipitation points. By the way, Vitamin E is one of the many naturally occurring compounds found in plant cuticle waxes.

Whole plant extracts like we use at Sow Eden tend to have a higher concentration of the polar plant molecules. Whereas many companies see these compounds as undesirable, we see them as beneficial. It’s what nature intended. CBD extracts rich in these compounds will be lower in total CBD, whereas a highly purified distillate will be 90%+ CBD. All of the plant magic has sadly been removed.

Pesticides and Other Lurking Toxins

Many of the CBD oils out on the market are either contaminated with pesticides or heavy metals, or both! They often go hand-in-hand! When examining the COA, make sure you check out whether or not there are pesticides or heavy metals. Heavy metals can include arsenic, lead, cadmium, and mercury. Since there is no regulating body governing the manufacture or sale of CBD oil, many companies forego pesticide or heavy metal testing. We always test our CBD extract and then re-test our final products to ensure our customers are getting a clean and safe product.

CBD oil can tend to have a powerful and, for some, an off-putting flavor. So many companies add flavorings to their CBD oils to mask the earthy flavor of the CBD extract they use. Beware of artificial flavorings added to CBD oils. For example, if it’s vanilla flavored, it can contain artificial vanilla flavoring, known as vanillin, or it can even just say “natural flavor.” What the heck does “natural flavor” even mean? It can contain all sorts of unregulated compounds. If it’s an essential oil, it is best that it be organic, or it can be low-grade and contain adulterants or residual solvents. It’s always good to know these things! At Sow Eden we always use the highest quality essential oils and organic botanical extracts to create our flavored CBD tinctures.

Thanks for reading! :) We hope you learned something in this blog. If you have any questions or comments, as always please share them below!