An Introduction to Raw Cannabinoids: CBDA and CBGA

By now you’re pretty familiar with CBD. You see it every-freakin-where. The gas station. Yuck! Your local grocery store. They’re even trying to sell it at the post mail box center around the corner from your house (yes, truly, WTF). Anyways, you’re probably bombarded with CBD, and as we have always preached, “ALL CBD IS NOT CREATED EQUAL.” But this blog isn’t really about CBD. It’s really about raw cannabinoids, and specifically CBDA and CBGA.

So, what the heck are CBDA and CBGA? And what is a ‘raw cannabinoid’?

CBDA stands for Cannabidiolic Acid, and it’s the pre-cursor molecule to CBD (Cannabidiol). When CBDA is heated for an extended period of time over 70º Celsius, typically during extraction of the oils from the plant to make ‘CBD Oil,’ the CBDA undergoes a chemical or molecular change known as ‘decarboxylation.’ Ok, think way, way, way back when you took chemistry in high school. Just kidding. Don’t hurt your brain too much. Maybe just watch Breaking Bad over again. But in all seriousness, decarboxylation just means the acidic, raw molecule (CBDA) undergoes a chemical change and loses a carbon molecule. This chemical change results in the conversion of CBDA, the raw precursor molecule, into CBD. Nearly all CBD products on the market contain little to no CBDA, because most commercially available CBD oil has been heated at some step in the extraction process. If you take fresh CBD cannabis flowers and juice them or do a cold extraction, you’ll most likely be consuming CBDA!

Now CBGA stands for Cannabigerolic Acid, and it’s the same exact explanation as above. When CBGA is heated for an extended period of time (during oil extraction), the molecule decarboxylates and converts to CBG (Cannabigerol). CBGA/CBG is sometimes referred to as the father (or mother) cannabinoid, because the cannabis plant begins by biosynthesizing CBGA, but it quickly converts into CBDA and THCA. The diagram below shows how CBGA turns into CBDA, THCA, CBCA, or CBG. I know it seems complicated, but you don’t have to worry or even care about the ‘science’. So let’s talk about the benefits of these raw, acidic cannabinoids and why they’re relevant.

THE BENEFITS OF RAW CANNABINOIDS

One major thing that sets raw cannabinoids apart from their decarboxylated counterparts is increased bioavailability in the body. CBDA and CBGA are absorbed by the body much more readily, and therefore less of the therapeutic compounds are lost to metabolic action. CBDA and CBGA, taken together with CBD and CBG, can also boost absorption.

CBDA AND CBGA: THE BENEFITS

What we do know about CBDA and CBGA is very promising. We know they both interact with the body differently than CBD and CBG. But like CBD, both CBDA and CBGA are still non-intoxicating, so they don’t get you high. There are also many overlapping therapeutic benefits.

Like CBD, CBDA activates 5-HT1A Serotonin receptors. In fact, preliminary research suggests CBDA is up to 100x more powerful at activating these receptors than CBD. Serotonin receptors and serotonin imbalance are linked to anxiety, depression, nausea, issues with sleep, and gastrointestinal problems. Another study found that CBDA was much more effective at treating nausea than CBD.

This study found CBDA to possess anti-inflammatory properties, via reducing the COX-2 enzyme. This would put CBDA in a similar category as NSAIDS, like Ibuprofen or Aleve. Yet CBDA does not come with all of the negative side effects associated with various synthetic anti-inflammatory drugs on the market.

Below is a graphic showing CBDA’s bioactivity. 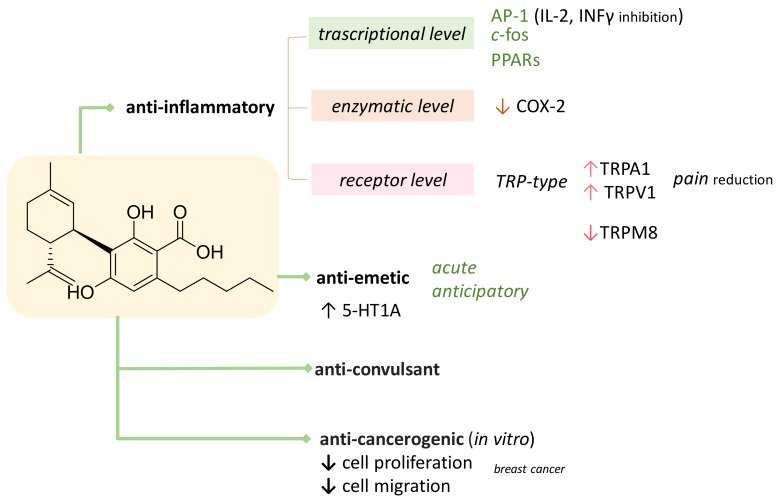 The most recent and very exciting study on CBDA and CBGA (in vitro) showed that both CBDA and CBGA bind to the spike proteins of the coronavirus, showing the ability of these acidic cannabinoids to prevent the virus that causes COVID-19 from entering human cells. Van Breemen and collaborators, including scientists at Oregon Health & Science University, found that a pair of cannabinoid acids –– specifically CBDA and CBGA –– bind to the SARS-CoV-2 spike protein, blocking a critical mechanism the virus uses to infect people. Van Breeman writes, ”And our research showed the hemp compounds were equally effective against variants of SARS-CoV-2, including variant B.1.1.7, which was first detected in the United Kingdom, and variant B.1.351, first detected in South Africa.” While this research is fascinating, we also have to remember it took place in vitro, meaning in a glass test tube in a laboratory. In any case, it’s very exciting research that has merit. Another recent study found that CBD itself, not CBDA, also blocked or reduced infection from Covid-19. Plants are really cool! 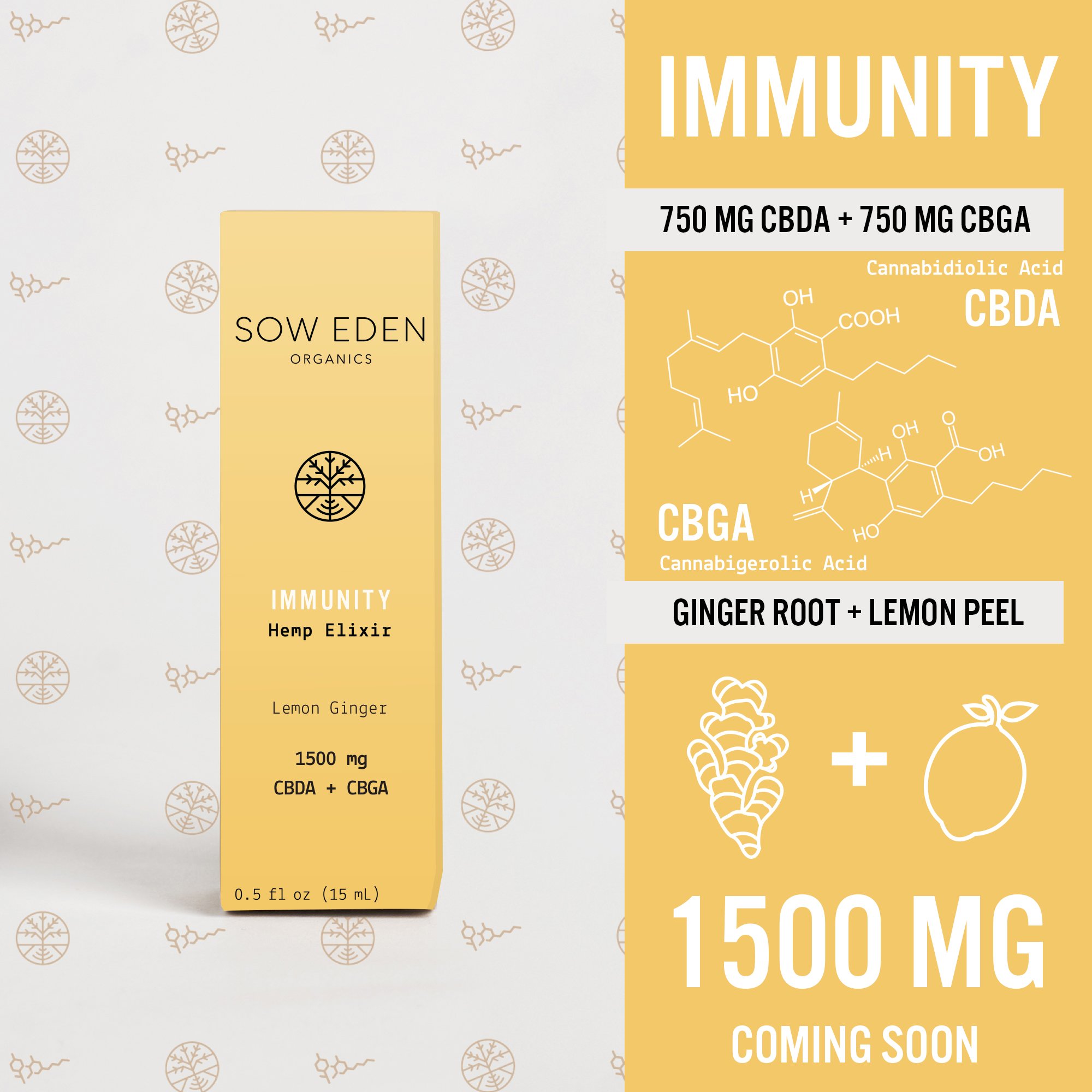 Our newest tincture is set to be released at the beginning of March. It will be our most concentrated formula we offer thus far, with 750 mg CBDA and 750 mg CBGA in a 1:1 ratio, for a grand total of 1500+ mg cannabinoids and 100 mg cannabinoids per full dropper. There will also be some CBD, CBDV, CBG, CBN, CBC, and various other minor cannabinoids and terpenes present to work their synergistic magic with the raw cannabinoids debuting in this new release. For added immune support, we’ve included cold pressed Lemon Peel extract and Ginger Root extract. It also tastes great. We can hardly wait to share this with you! We will be taking pre-orders near the end of February! We recommend incorporating our IMMUNITY tincture into your regular CBD routine to maximize the therapeutic benefits via the entourage effect! **

These statements have not been evaluated by the Food and Drug Administration. They are not intended to diagnose, treat, cure, or prevent any disease